VISTA – A personal trainer from Oceanside who claimed his surgeon botched an operation to remove a small gland in his neck was awarded $1.1 million by a jury this week.

“Jurors found Dr. Stephen Wilson was negligent when he removed a parathyroid gland from John Colombero, a 40-year-old father of three,” said Gregory Patton, Colombero’s attorney Patton had argued that Wilson severed a key nerve, known as the vagus nerve, which stimulates the larynx, and most of the abdominal organs. That led to a series of problems for Colombero, including daily nausea, digestive problems and vocal cord damage.

“Colombero must take daily medication, does not work and has seen his weight drop from 219 to 176 pounds now,” Patton said.

“Since the surgery, his life has been ruined,” Patton said. “He vomits each day and feels ill every day. He can’t do anything outside the house, and spends much of the day inside the house.”

An appeal of the verdict is under consideration, said Daniel Belsky, attorney for Wilson, a general surgeon on staff at Tri-City Medical Center, where the operation occurred. He also has a practice in Vista.

He said several experts testified that Wilson “treated this man appropriately and within standard of care and used good judgement and reasoning at the time of the surgery”. 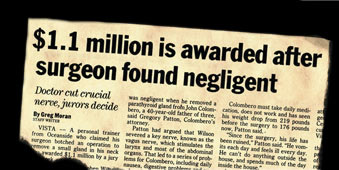