Kaiser Permanente has been ordered to pay $848,000 to the family of a 29-year-old Riverside man who died last year after the hospital misdiagnosed his strep infection as flu.

Harun Antwine dies March 4, 1998, after he being taken to Kaiser Permenente facilities in Fontana and Colton with a high fever, said attorney Gregory Patton of Santa Ana.

Patton represented Antwine’s wife Sandra and the couple’s three children in a binding arbitration hearing with Kaiser last week that resulted in the financial order.

Kaiser doctors diagnosed Antwine and after a brief hospital visit told his wife to take him home and “just ride it out,” basically, Patton said. “The doctors prescribed no antibiotics,” he said. 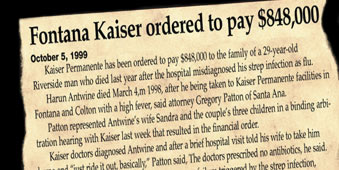