COURTS: Co-workers passed around a photograph of a man taken while he was in a restroom.

A Superior Court jury has awarded $1 million to an auto-body works worker from Huntington Beach who was unknowingly photographed in a company restroom and later subjected to jokes about the size of his penis.

“The jury found that he was humiliated, embarrassed and distressed,” lawyer Gregory Patton said of his client, Chris Fotiades, 28. “It changed his life.” Fotiades, a production manager at High-Tech Collision and Repair, a Garden Grove-based chain of auto-body repair shops, was photographed in October 1995.

The lawyer maintained that his client is of “perfectly normal size.” Patton said that in the photograph, his client’s clothing hid most of him, but shop supervisors started spreading jokes in front of co-workers.

Patton said Fotiades was later transferred to another shop in the chain but the harassment didn’t stop.

“The picture was mailed to the manager at the second shop, “ he said. “The manager opened it in the lunchroom and passed it around.”

“The jokes started all over again.”

Trial testimony by a female co-worker showed that Fotiades “went from being Gregoryarious to inverted and quiet,” Patton said.

Fotiades ultimately left the company because of the jokes, Patton said. 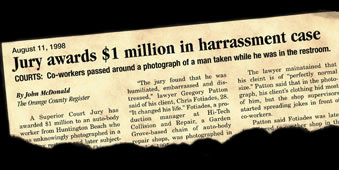