A newlywed who survived a car crash with minor injuries, only to end up in a permanent vegetative state after a routine hospital tests, was awarded $17.6 million by a Santa Ana jury Wednesday.

The medical-malpractice judgement is one of the largest in recent Orange County history.

The bulk of the award – $15 million – will pay for the future medical care of Sean Paul Ponce, 28, who on Nov. 14, 1999, could not breathe for 11 minutes because of negligent care at Western Medical Center in Santa Ana, jurors found.

His wife, Priscilla, was awarded $1 million for loss of her husband’s love and companionship. At the time of the accident, Sean and Priscilla Ponce had been married six months. Sean Ponce, formerly of Santa Ana, now lives in a Tustin nursing home.

“He loved me for being me – not for my looks, not nothing, just for being me,” said Priscilla Ponce, 29. “He was my first boyfriend, my first husband. He was the world to me.”

Dr. Bruce Bullias, described by his attorney as a well-qualified emergency-room specialist for more than 25 years, was negligent in caring for Sean Ponce, the 12 jurors decided at the Orange County Courthouse.

Jurors determined that Bullias left the emergency room before properly … 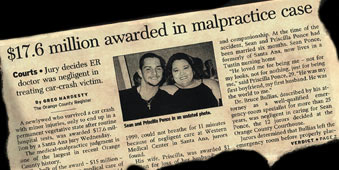