After the conclusion of trial Friday, Judge Burns had informed the parties she would make a decision Monday, when she ordered the federal government to pay Cooper $2 million for noneconomic damages such as pain and suffering and $566,000 for lost wages.

An attorney for Cooper told Law360 on Tuesday that they were pleased with the outcome of the case, which was filed in October 2015.

“This is the first time that a federal judge has ruled on evidence presented in a trial and confirmed that the VA’s health care provided to a veteran was not only beneath the standard of care but was a situation where the obvious signs of prostate cancer were completely ignored,” Patton Mosier’s Gregory A. Patton said. “As a result, his curable disease is now terminal, totally unnecessarily.”

Patton said that it was unusual Judge Burns rendered a decision so quickly in a bench trial and chose to read the judgment in open court.

Another attorney for Cooper, Michael Schrag of Gibbs Law Group LLP, echoed that sentiment, saying Judge Burns’ ruling was a “powerful message that Mr. Cooper deserved better from the VA.”

A spokesman for the U.S. Department of Justice declined to comment.

Cooper had been diagnosed with prostate cancer one year after the nurse practitioner’s examination and claimed that the one-year delay allowed the cancer to spread to other organs, according to court papers.

Cooper is represented by Gregory A. Patton and Holly Mosier of Patton Mosier and Michael Schrag and Linda Lam of Girard Gibbs.

The federal government is represented by Ann E. Harwood and Elizabeth K. Sichi of the U.S. attorney’s office in Phoenix. 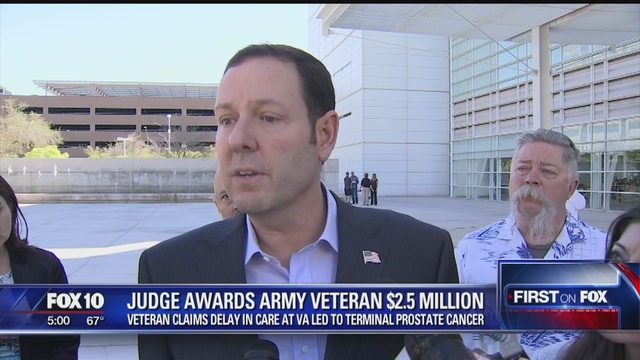