A jury awards a Laguna Niguel man $3.4 million in a suit against his doctor

A Laguna Niguel man won a $3.4 million jury award in Orange County Superior Court on Tuesday in a case that blamed his doctor for failing to diagnose his bladder cancer in a timely manner.

Marvin Doniger went to Dr. Ronald McGee, his primary care physician of 15 years, in June 2002 describing painless but profuse bleeding when he urinated. According to the lawsuit, McGee thought Doniger had a kidney stone and told him to wait for more symptoms.

“Everybody knows to get a second opinion when the doctor gives you bad news,” Doniger, 61, said. “You never think if the good news is warranted.”

McGee’s lawyer, Susan Schmid of Los Angeles, said the doctor had good reason to believe that Doniger’s problem was kidney-related.

“He is a fabulous physician. He really cared about Mr. Doniger,” she said.

Bit six months later, when Doniger urinated blood again, McGee referred him to a urologist, who diagnosed bladder cancer. Surgeons removed Doniger’s bladder, which led to excessive blood loss. Doniger now walks with a cane, wears braces on his legs and urinates into a bag attached through his stomach.

Jurors agreed that the delay in the diagnosis allowed the cancer to spread to the bladder muscle, which meant the organ had to be removed.

“They realized, in a man over 50 years old who has blood in his urine, it is bladder cancer the majority of the time,” said Gregory Patton, Doniger’s Santa Ana attorney. “The doctor decided that he knew more than urologists do, and he was going to treat it like a kidney stone.”

A woman who answered the phone at McGee’s office said the doctor, who also works at Saddleback Memorial Medical Center, was out of town for three weeks. The hospital declined to comment.

Schmid said that she was considering a challenge to the verdict and that another doctor whom she wouldn’t name was responsible for the delay in Doniger’s treatment.

The most common sign of bladder cancer is noticeable blood in the urine, which can also be a symptom of a urinary infection, diabetes or prostate cancer, among other illnesses.

Nearly 500 people are diagnosed with bladder cancer each year in Orange County, according to the National Cancer Institute. The disease is thought to be treatable if caught early.

During the procedure at UCLA to remove Doniger’s bladder, he required 100 units of blood.

The blood loss and nerve damage caused him to develop peripheral neuropathy, or pain and weakness of the legs and arms.

After 18 months of physical therapy, Doniger has trouble getting around.

Doniger owned a management consulting firm but can no longer work. He said he misses playing golf, tennis and swimming and running. He said he can’t lift his 2-year-old granddaughter, Riley, onto his shoulders and take her to the park.

“She can walk better than me,” Doniger said. “I’m watching her at a distance, which is really hard.” 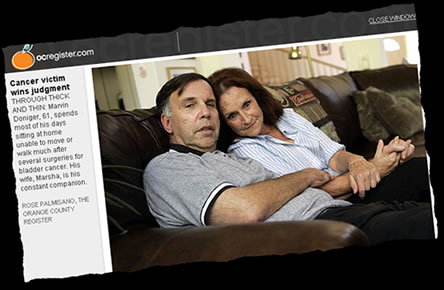