By Kerry Fehr-Snyder – The Arizona Republic

Most 4-year-old boys spend their days playing with Hot Wheels, learning to ride their bikes and learning ABCs. Not Isaac Bautista.

Josefina and David Bautista have been struggling to give their son Isaac as normal a life as possible following his problematic delivery four years ago at Good Samaritan Regional Medical Center.

“It will take $6 million to take care of Isaac for his life, just to keep him alive,” said Gregory Patton, the Bautistas’ lead attorney.

Patton, based in Santa Ana, Calif., characterized the settlement as one of the largest of its kind. Co-counsel Clifford Heiny of Mesa said such malpractice cases rarely exceed $ 4 million.

Good Samaritan issued a written statement Wednesday, calling the case “emotional and tragic for everyone involved.”

The Bautistas claim their son was left blind and suffers from spastic quadriplegia after doctors waited two hours to perform a C-section and then were unable to resuscitate him for more than seven minutes after birth, starving him of oxygen and causing severe brain damage. 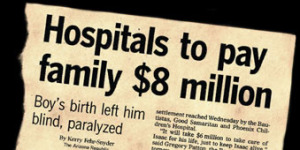