An Otay Mesa family filed suit Friday against Home Depot seeking damages for the death of their 3 1/2-year-old daughter who was crushed by a falling door at the discount chain’s South San Diego outlet in September.

Nora Carrasco was with her parents, brother and sister in the store on Saturn Boulevard last Sept. 23 when the accident occurred.

The suit, filed in San Diego Superior Court, claims that Ramon and Lilia Carrasco, the dead child’s parents, and her sister and brother witnessed the accident in which a heavy door, leaning against a display, fell, striking the child on the head and inflicting fatal injuries.

Santa Ana attorney Gregory Patton said in the suit that the Carrascos suffered “great emotional disturbance and shock” and asked for damages for the family’s pain and suffering as well as compensation for lost wages of the parents, medical and burial expenses and punitive damages.

The lawsuit claims that the home-improvement store employees and management of the chain “knowingly and continuously displayed merchandise in such a dangerous manner in spite of previous incidents involving serious injuries to patrons as a result of falling merchandise during the two-year period immediately preceding” the child’s death.

Patton did not specify the amount of damages the family was seeking. 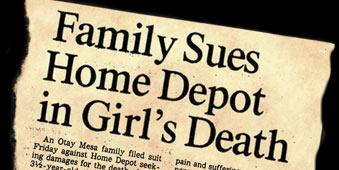